Every application we come across today implements security measures so that the user data is not misused. Security is always something that is changing and evolving. Authentication is one of the essential part of every application.

JSON Web Token or JWT, is a standard for safely passing claims in space constrained environments. Simplicity, compactness and usability are key features of its architecture. JWT (JSON Web Token) is a secure way to encapsulate arbitrary data that can be sent over unsecure URL's.

JWT is generated by server with a secret key, so it can't be changed by the user. JSON Web Token is a powerful tool for confidently transmitting data between users, servers, or any other combination of services. Based on an open standard (RFC-7519), JWTs are digitally signed with an encryption algorithm, so the receiving party can trust the information contained within. In computer security this concept is known as Data Integrity. The worst thing is that JWT tokens can't be revoked.

JWTs are just some JSON data that you can verify came from someone you know. JWTs give people an easy way to pass data between each other, while at the same time verifying who created the data in the first place.

Every JWT is generated with the same structure. There are three parts, separated by a period. Each section (except signature, in some cases) is comprised of base64url-encoded JSON containing specific information for that token.

The first section is known as the header. This is where a meta data pieces of information are contained:

This isn't a comprehensive list of all the parameters you can find in this section, but is instead a highlight of some more common parameters you'll likely encounter. You may have noticed the overall theme of this section is encryption — which is why you may also see this section referred to as the JSON Web Encryption (JWE) header.

The second section is the payload (also known as claims) and the core of any JWT. Claims are the JSON data inside the JWT. This is a place where the JWT issuer can store custom information for the receiving party. It's the data you care about, and want to pass along securely to someone else. There are Custom and Registered types of claims that can be used in the payload:

The final section is the signature. This is what makes a JWT secure and ensures the integrity of your JWT during transport. The signature is simply a hash of all the content that was generated with the JWT. That means if any part of the JWT changes, the signature will be invalidated — rendering the JWT malformed. A JWT is signed with a JSON Web Algorithm (JWA).

There are two main ways to sign JWTs cryptographically: using symmetric or asymmetric keys. Both types are commonly used, and provide the same guarantees of authenticity. 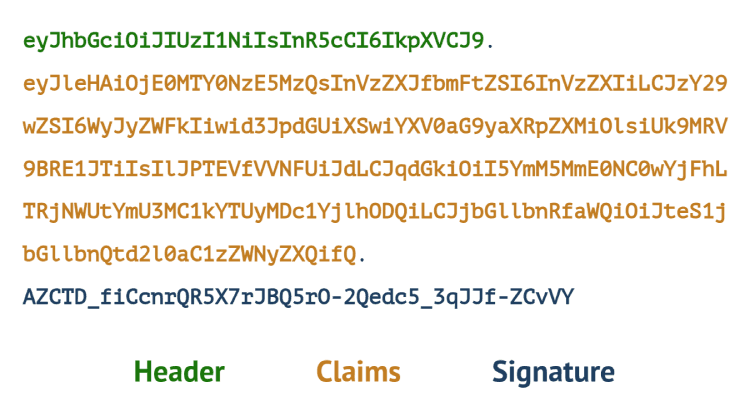 What problem does it solve?

Keep in mind that anyone can decode the information contained in a JWT without knowing the private keys. For this reason, you should never put any sensitive information in a JWT. The purpose of a JWT isn't to encrypt data so it can't be read during transport, instead it allows the receiving party to trust that the data received was unaltered during transport. With that out of the way, we can dive into what makes up a JWT. 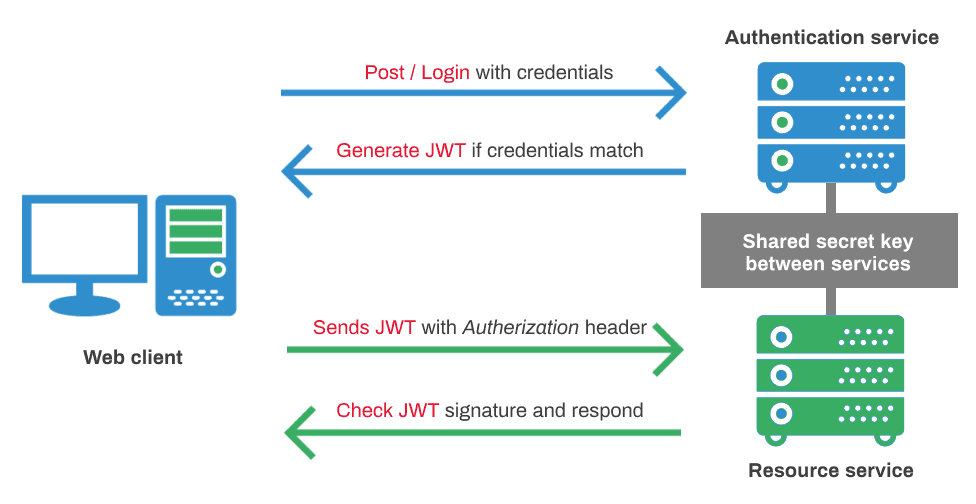 The most common use case for JWTs is authentication. There are tons of web security libraries which use JWTs as session tokens, API tokens, etc.

As JWT is self-contained, it contains all information about the user:

In the old days of the Web, authentication was a pure stateful affair. With a centralized overlord entity being responsible for tokens, the world was fairly simple:

This worked rather well in a world of integrated systems, when servers rendered frontends and dependencies existed on e.g. package-level and not between independently deployed applications. In a world where applications are composed by a flock of autonomous microservices however, this stateful authentication approach comes with a couple of serious drawbacks:

Stateless authentication describes a system/process that enables its components to decentrally verify and introspect tokens. This ability to delegate token verification allows you to (partly) get rid of the direct coupling to a central token overlord and in that way enables state transfer for authentication. Having worked in stateless authentication environments for several years, the benefits are clearly:

However, stateless connections naturally also have their disadvantages:

A JWT is usually attached to a HTTP request via the HTTP Authorization header as a Bearer token.

The JWT will have to be sent with every request to the backend, which is a tradeoff to consider. The great benefit of this approach is that this provides a stateless form of authentication since the server doesn't have to remember the user's information in session storage, significantly reducing the amount of work required to manage that state on the backend.

A drawback is that since JWTs are stateless, you cannot invalidate them without storing session state. JWTs will automatically be invalidated after their expiration date, but depending on how long the expiration was set for, a user could retain access to a service after being removed. 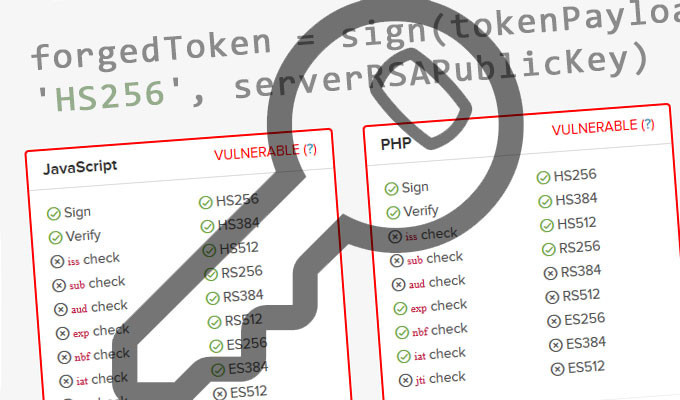 Where to store JWT?

Don't use localStorage for any sensitive data on the front-end. This is a very bad idea and will open you up to an extremely wide array of attacks that could absolutely cripple your users.

Identifying tokens for authentication, session, and advertising tracking should be stored in cookies. Those cookies have to be properly configured to prevent XSS and CSRF.

While JSON Web Signature (JWS) provides a means to validate data, JSON Web Encryption (JWE) provides a way to keep data opaque to third parties. Opaque in this case means unreadable. Encrypted tokens cannot be inspected by third parties. It is important to note that just as in JWS, JWE essentially provides two schemes: a shared secret scheme, and a public/private-key scheme.

The JSON Web Key (JWK) is a JSON object that contains a well-known public key which can be used to validate the signature of a signed JWT.

If the issuer of your JWT used an asymmetric key to sign the JWT, it will likely host a file called a JSON Web Key Set (JWKS). The JWKS is a JSON object that contains the property keys, which in turn holds an array of JWK objects.

The service may only use one JWK for validating web tokens, however the JWKS may contain multiple keys if the service rotates signing certificates. The endpoint for retrieving a JWK(S) can vary and should be documented for your issuer.

Any time your application validates a JWT, it will attempt to retrieve the JWK(S) from the issuer in order to ensure the JWT signature matches the content.